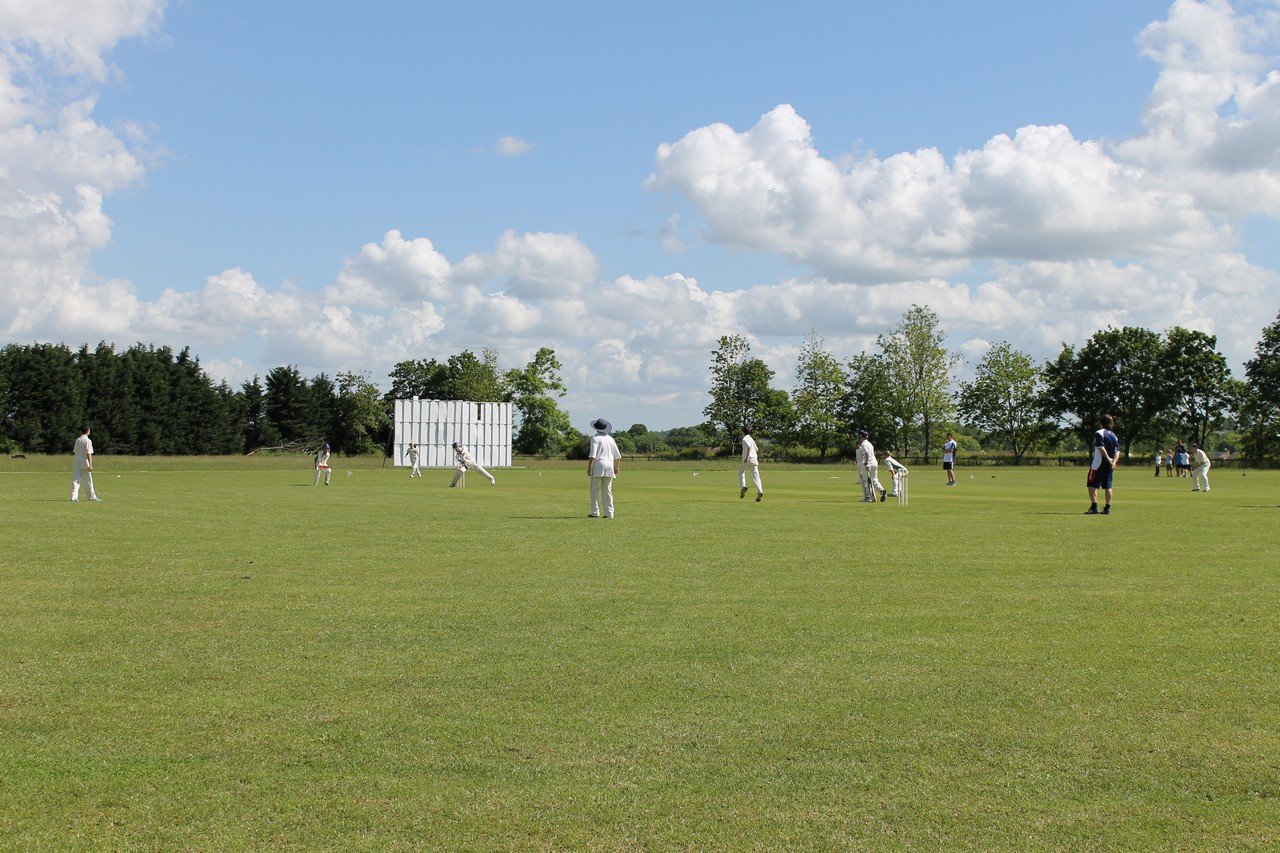 Into battle: The under-13s get ready to start their innings

Ickleford hosted us on a beautiful, warm and sunny Sunday morning. Henry W lost the toss and we were put into bat on a slightly damp, sticky wicket. As we were soon to discover!

Henry W and Kyle opened as usual but neither were there for long, both boys falling for ducks, caught off mis-timed pulls to the same area off the same bowler in the same over!

And that wasn’t the end of the drama in only the second over of the game: Ted was the third to fall, this time bowled, also for a duck. The omens weren’t looking good at all.

In-form Jonny looked to steady the ship, with a lovely timed drive for four off his first delivery. Henry G joined Jonny and both batsmen looked to rebuild but you could sense the tension as Ickleford rightly knew they had us on the ropes.

Sadly, any glimmer of optimism was soon dashed as yet another mis-timed shot by the usually reliable Henry G saw him caught, too.

Jake came in rather earlier than even he might have expected, but he had a new blade – newly knocked-in – so it was now or never.

He soon put his new-found skills and blade to work, stroking a couple of lovely boundaries but then, just as he and Jonny looked like they were starting to rebuild, Jake found himself isolated well out of his crease off their spinner, stumped for a very valuable ten.

Daniel joined Jonny in the tenth, with the score about 29-5 and, like Jonny, opened his account with a textbook cover drive for four.

And, as if we hadn’t seen it once or twice already, Ickleford were able to nip any kind of threatening partnership in the bud, Jonny being run-out for a very useful 12

By this time however, Daniel had begun to find his feet with a series of boundaries. Ewan replaced Jonny and seemed keen to hit the ball very hard from the outset, smashing a straight drive over the bowlers head, only to be restricted to a single by a sweeping long-on fielder.

Ewan delivered a few hefty blows but he too, sadly, eventually mis-timed a shot and was the fourth caught wicket of the morning.

With Daniel still at the other end, seemingly untroubled by the sticky wicket, Jack came in looking positive and ready to take the score into the 70s but that wasn’t to be as he was run out midway through the last over.

Young Alex G didn’t have the chance to face a ball so we closed on 62-8, with Daniel unbeaten on a quite outstanding 21.

Henry W and Kyle opened the pace attack, knowing that we needed to defend the boundary at all costs, take early wickets and bowl Ickleford out.

And so we began with some excellent bowling from both boys. Henry W made the breakthrough with his third delivery, Ted taking a superb catch behind off a glove.

Henry took his second wicket LBW with the last ball of the first over, a double-wicket maiden.

Kyle then continued with a wicket maiden in his first over and taking another couple in his second, leaving Ickleford on 15-5 off four.

Things were looking promising. In his fourth, Kyle bowled their danger man, who, by now, had accumulated a flurry of fine edges down the legside, just out of reach of the ever-stretching Ted.

Henry G and Daniel were first change but a couple more leg-side edges to the boundary off the latter were ill-afforded, with the score creeping ever closer to the target.

Some excellent fielding throughout prevented several other boundaries with notable efforts by Jack and young under-11 debutant Will R.

Henry G took a welcome wicket, bowled, to rekindle the belief with his second delivery and shortly afterwards, young Alex bamboozled the on-strike batsman into a mis-timed shot to a shortish mid-on, which was plucked out of the air by Buckets – his fifth catch of the season.

An excellent riposte by Team Gallimore but it wasn’t enough and Ickleford earned a well-deserved victory with eight or so overs to spare.