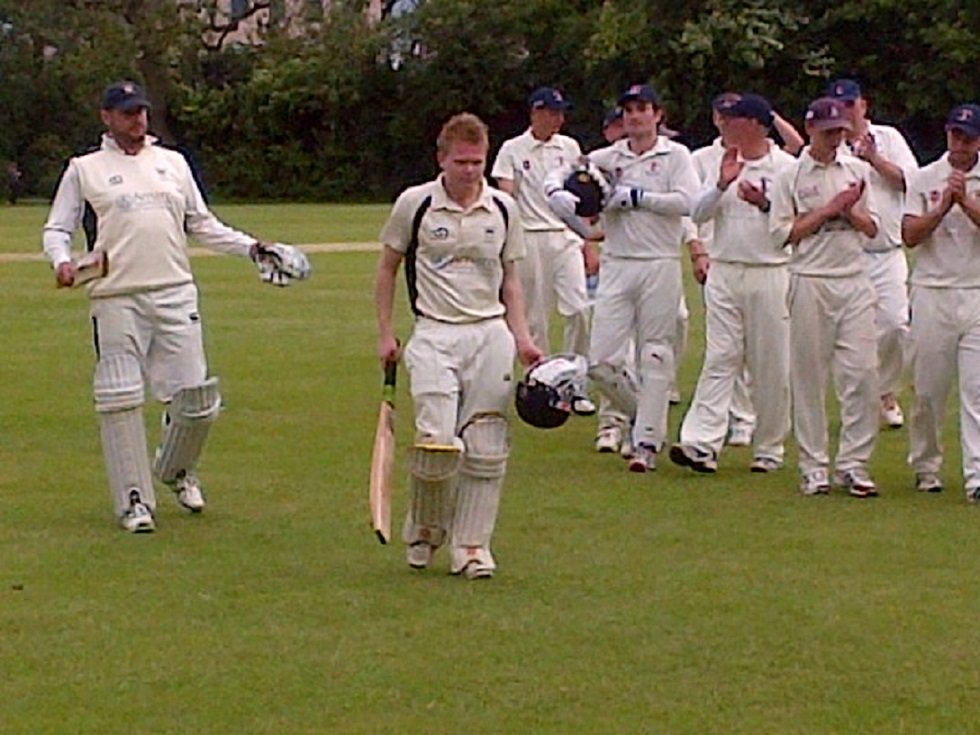 Top knock: Ollie Pitts is clapped off the field after his match-winning effort

Knebworth Park Seconds had Ollie Pitts to thank this Saturday as they recorded their third win of the season.

A very mature innings of 49* by the teenager was enough to take the team home in their pursuit of 118, set by Potters Bar earlier in the day.<

Winning the Toss for the fifth time this season, Sam McCrow put the opposition in on a moist pitch that looked like it had a bit in it.

The decision looked to be a good one, as McCrow took the opening wicket with his first of the day, trapping the Potters Bar opener LBW.

Guy Warman opened up at the other end and bowled another very controlled spell, picking up regular wickets, finishing with great figures of 4-53.

At the other end, Tom Elliott bowed a very impressive spell, taking the caught and bowled of the year, when a huge drive was hit back at him, which he plucked out of the sky.

It was a great catch and a very important wicket, as it removed Potters Bar’s key man, Taylor.

With Potters Bar on 60-6, there was a wag in the tail and the lower order put on a another 58 runs before the Orchard brothers, Ben and Jack, cleaned them up with two wickets apiece.

The Knebworth Park Innings got off to a dreadful start, with Warman, Ryan Skeggs and the in-form Adrian Holmes in the hutch before the score got to 20.

But  a vital stand of 76 between Pitts and Alex Richmond (37) steadied the ship and ensured that Knebworth got home with 39 overs to spare.

Young Pitts batted with great maturity and never looked like giving his wicket away – a true man of the man of the match performance from the young man.