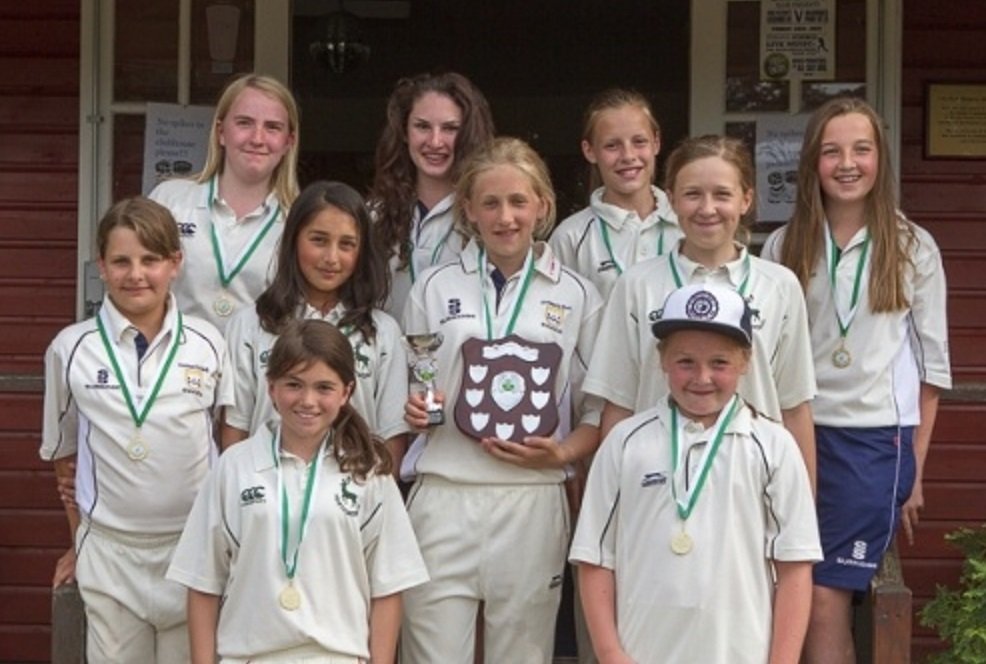 Winners: The under-13 girls are defending county champions

On a very pleasant evening at Verulam School ground, Knebworth Girls took on St Albans in the under-13 Audrey Collins HJL League.

With a full-strength side of ten girls playing, hopes were high of winning the game and hopefully seeing us through to the league final for the second year running (KPCC are reigning champions).  We lost the toss and were asked to bat first.

Although an early wicket fell with Safia being caught from a lofted drive, Izzy batted with some real venom and belted some lovely fours to finish on 19 from just nine balls.  So, after the first pair finished their four overs, KPCC had a good base at 25-1.

The second pair, sisters Charlotte and Olivia, pushed the score up to 30 against some accurate bowling with just the one wicket falling when Olivia was bowled.

The third pair of Charlotte and Daisy played well with Charlotte hitting some good front foot drives as well as a nice pull from a full toss.  Although runs dried up a little in the last couple of overs, the score had moved on nicely to 47-2 by the end of the 12th over.

Roz and Catherine then came to the wicket as the penultimate pairing.  Catherine continued her recent good batting form with some strong shots.  Although Roz fell to a caught and bowled chance, she batted well and, with Catherine finishing on 17, the team score moved to 61-3 after 16 overs.

This brought Amie and Zoe to the crease and the pair both batted well and put pressure on the fielders with some good running between the wickets. Initially, Zoe  hit a couple of good fours and then Amie followed (once she got on strike!) with a couple of her own.  The acceleration in scoring was exactly what we were looking for and the girls completed our 20 overs without losing another wicket so we finished on 93-3.

St Albans, who we have played for the last couple of seasons had improved their bowling enormously and, rather perversely, this gave our batters a slightly better chance to score runs than in previous matches where extras and inconsistency prevented proper batting shots being played.

It was always going to be a tough target for St Albans bearing in mind the quality of Knebworth’s bowling attack.

The job got even tougher when Charlotte W took two wickets in two balls in her opening over.  Izzy bowled with her typically tight line and length from the other end. The two girls restricting St Albans to minus eight at the end of the first four overs.

When Amie came on to bowl, her pace immediately caused the batters issues.  She was a little unlucky to concede a couple of fours off thick edges but this didn’t put her off and she continued her good spell to finish with two for just those eight runs.

From the other end, Roz continued her excellent season where her bowling has massively improved and both her line and length and pace was righty rewarded with a superb spell of two overs, three wickets for two runs.  With the wickets tumbling, St Albans score had dropped to minus 22 after eight overs.

The third pair of bowlers, Catherine and Zoe, kept the pressure on and Zoe got us another wicket.  St Albans only managing to improve the score a little with it being minus 18 after 12 overs.

Things didn’t improve for the home side in the next set of four overs with these being shared between Safia, Charlotte, Daisy and Olivia.

Olivia bowled very well and was rewarded with a wicket from her last ball.  With only a few runs conceded, it was minus 11 at the end of 16 overs.

A completely dominant batting and bowling performance from the girls with 13 wickets being taken in total (12 from bowlers plus a run-out from Izzy aided by Catherine).

The first game of the season was an under-13 game against Abbots Langley (currently second in the league).  The result was a reasonably close affair with final scores of Abbots’ 230-9 against KPCC’s 256-5. The star on the day was Charlotte W with four wickets for six runs.

The second game was another under-13 game against Hemel Hempstead who we beat in last year’s final.  Although there were some nervous moments in the game, the depth in the KPCC girls squad was the key difference. Hemel batted first, finishing on 256-3 but KPCC won with 276-5, Catherine top-scoring with 16.

The first game to be played in the inaugural season of the under-15 girls league was away at Berkhamsted.  With the under-15 league being played as proper 20-over cricket rather than pairs, it was a good opportunity to see the girls play in a different format.

They didn’t disappoint.  Berko batted first and scored a respectable 78-4 after their 20 overs.  All ten KPCC girls bowled and all were good.

In reply KPCC, although never really looking in trouble, did struggle to score runs against an inconsistent bowling display where extras were comfortable top scorers!.  However, in the end, Zoe and Catherine scored runs and Izzy and Charlotte B ran well to see us home with 79-3 in the 19th over.

With rearranged games to play in the next couple of weeks against Berkhamsted again and then Harpenden twice, we’re looking forward to trying to get to the under-15 final, too.  Let’s hope the girls continue their good form.