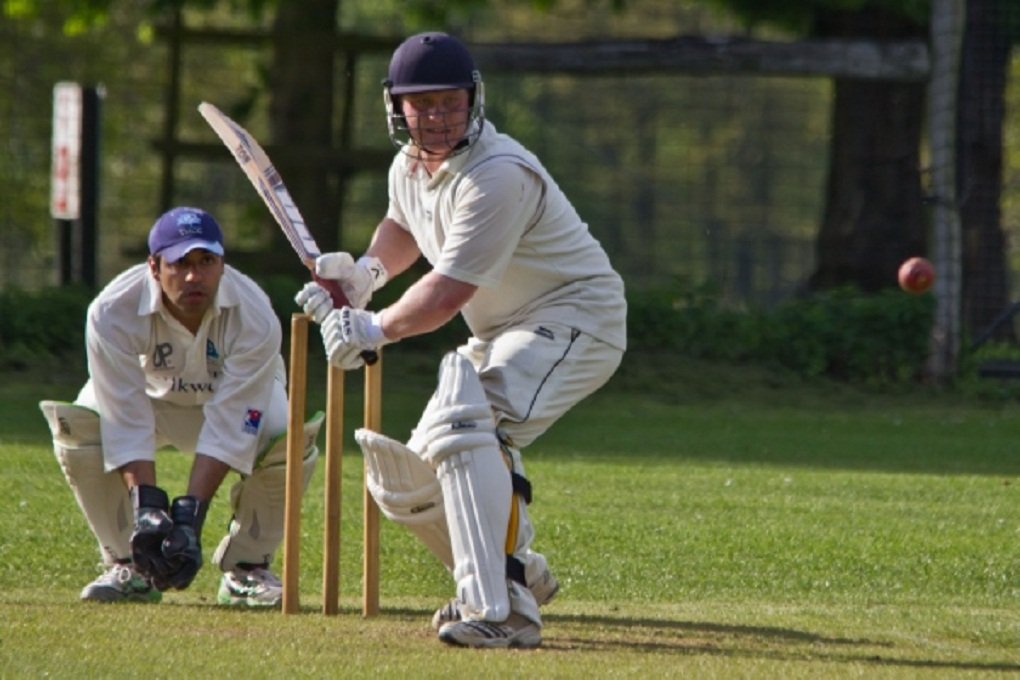 Knebworth Park headed to Flitwick on the second weekend of the season hoping to continue their promising start to the season and register back to back victories to kick off their campaign.

After heavy rain overnight, conditions at Flitwick were borderline, but with both sides keen to get a game in when others might not, the umpires decided that play would start on time.

Park captain, Charlie Randall, won the toss and had no hesitation in asking the opposition to bat, hoping to take advantage of the overcast conditions.

Park made a promising start in the field, with opener James Leather producing extravagant swing and Randall backing him up with a large slip cordon and some tight bowling at the other end.

It was Leather who provided the opening wicket, bringing the ball back into the Flitwick opener and trapping him LBW for one.

Knebworth continued to attack and Leather was unlucky not to be given another close LBW decision after catching the Flitwick No.3 back in his crease.

Shaun Robinson was introduced into the attack shortly after and picked up a smart caught and bowled in his first over.

However, all too predictably the grey clouds started to roll in after around 15 overs and given the already damp conditions, as evidenced by Danny Digweed’s attempt at bog snorkelling when chasing the ball to the boundary, the umpires had no choice but to take the players off the field with the score on 54-2 from 18 overs.

Play was suspended for half-an-hour and the match was reduced to 45 overs a side.

It was perhaps at this point that Knebworth’s determination to complete the game backfired on them.

With spinners Patel and Chapman still left to bowl, Park had real difficulty in keeping the ball dry on a still damp outfield.

It was at this point that Flitwick skipper George Thurstance sensed the trouble the bowlers were having and went on the attack.

With the wet ball no longer swinging and not producing much spin, Thurstance was free to hit through the line and clear the infield.

Within six overs of the rain break, Flitwick had doubled their score, reaching 128-3, of which Thurstance had 59.

Patel regained some control for Park after a ball change resulting from Thurstance depositing the original in the river at the bottom of the ground.

However, the batting Powerplay then arrived and the opposition captain accelerated once again, reaching his hundred from just 79 balls.

It was at this point that Richard Leather was introduced into the attack and after taking some heavy punishment from Thurstance in his first over, he had his man caught by Patel for 120. He then proceeded to take another 3 wickets as the Flitwick tail-enders looked to go big in the last 5 overs, finishing with figures of 4-31.

Phil Simpson, pictured above, was able to pick up 2 wickets of his own as Flitwick ended on 254-9, which was then boosted by three runs by Duckworth-Lewis.

Knebworth began their innings in promising fashion with Richard Leather punishing some loose bowling early on.

However, Park’s afternoon began to go downhill when a misjudgement from Leather saw him run-out for 16.

After losing a number of wickets in quick succession, Knebworth’s hopes of winning the game began to fade and only Simpson offered any real resistance.

Flitwick bowled smartly and hung on to two stunning catches to remove Robinson and James Leather.

Simpson was eventually dismissed for a hard fought 56 and No.11 Luke Chapman soon followed to see the Park bowled out for a disappointing 128.

With only two men making double figures, Knebworth will have to reassess their approach when batting second and build partnerships to get them over the line.

In truth, Knebworth were beaten by the better team on the day and a wonderful innings from Flitwick captain Thurstance.Park will be left rueing their eagerness to get back on the field so soon after the rain break which produced the big momentum shift in the game.

There were some positives for Park to take into next week, with the bowling performances of James and Richard Leather and Phil Simpson’s lone effort with the bat providing some encouragement.