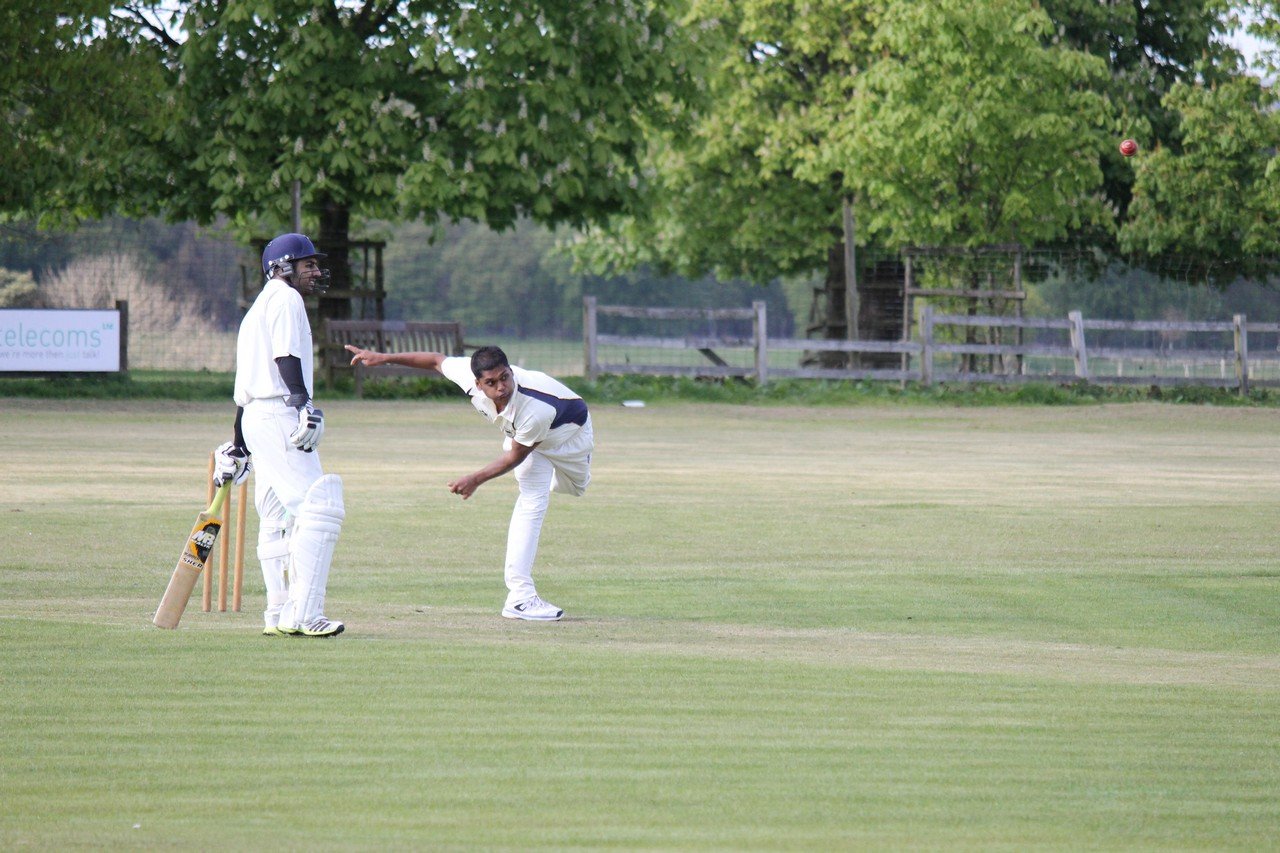 On the warmest weekend of the year so far Park won the toss and decided to bat first, making first use of a flat looking wicket.

Park started their innings strongly, with Richard Leather and Phil Simpson both looking to be positive and put the opposition under early pressure.

Boundaries were hard to come by initially as the impact of rain earlier in the week meant that the ball wasn’t coming onto the bat as well as it might.

The Park openers adapted quickly with aggressive running between the wickets which the opposition fielders struggled to cope with.

The introduction of spin steadied the flow of runs for a while but, as the fielders began to sit deeper and deeper in the 30-yard circle, Leather and Simpson continued to accumulate runs.

Perhaps frustrated with the lack of boundaries, Leather gifted Old Finchleians a simple chance when he mistimed a lofted drive straight to mid-off.

However, the fielder put down the easiest of catches and the Park opener was given a second life.

Another drop, this time off Simpson, allowed the opening stand to continue and Leather reached his half-century in good time.

After a couple of fine maximums down the ground, Simpson was caught on the boundary attempting another with the score on 99, denying the Park a rare century opening stand.

With the foundation set, Parth Patel, pictured above, replaced Simpson at the crease and found the middle of the bat from ball one.

With the opposition’s fielding becoming ever more shambolic, the Park began turning the screw and punishing their indiscipline.

Leather was on 80, looking on course to record the first century at the Park this season, until he dug out a low full toss straight to the man at midwicket.

Patel was joined by Josh Roseberry and the pair went on the attack. With only 15 overs to go and plenty of batting to come Patel quickly raced to 50 with some well-timed shots both sides of the wicket.

He then went up another gear, clearing the ropes on a number of occasions and taking advantage of the opposition’s inability to hold on to the chances he presented them.

Despite reaching the nervous 90s, Patel continued to attack selflessly but it was not to be as he finally picked out the wrong fielder and fell for a superb 95.

Roseberry also reached 50, with the Park finishing on 289-5.

With an imposing victory target, Old Finchleians began their reply positively and their captain Fletcher looked to punish any short-pitched deliveries.

James Leather struck in the fifth over of the innings, finding the edge of the bat with Benji Cowell doing the rest behind the stumps.

However, Park continued to present scoring opportunities to the batsmen and were struggling to establish their dominance.

However, Leather struck again in the tenth over, clean-bowling Fletcher with a quick yorker, to make the score 54-2.

Shaun Robinson was introduced into the attack at this point to tie down the new batsmen and start to build some scoreboard pressure. He soon settled into his usual rhythm and removed the dangerous Chetan Depala Junior, who was smartly caught by young debutant Jason Timm at mid-on

Timm was then introduced at the other end to bowl his leg-spin. He also looked composed, quickly settling on a length and beginning to dry up the runs.

Robinson struck twice more, with Josh Roseberry firstly taking a smart catch at cover and then by bringing the ball back in and clean bowling the visitor’s number 5.

With the score around 115-5 at the halfway mark, Old Finchleians decided to adopt a more negative approach and play for batting bonus points rather than try to win the game.

This approach frustrated Knebworth, who let their concentration in the field slip towards the end of the game.

Despite a further wicket each for James Leather, Parth Patel and Phil Simpson, the Park were not ruthless enough to finish the opposition off and 65 not out for Savani took the score up to 211-8.

Park will be happy with the victory, which in truth should have been more comfortable than it was. It was particularly pleasing for the skipper Charlie Randall that the top four batsmen bounced back from last week’s disappointment, all making strong contributions and setting up the victory.

Knebworth will surely face a tougher test next week when they travel to the early front-runners Hertford and will have to raise their standards once again to record back-to-back victories and keep the forward momentum going.