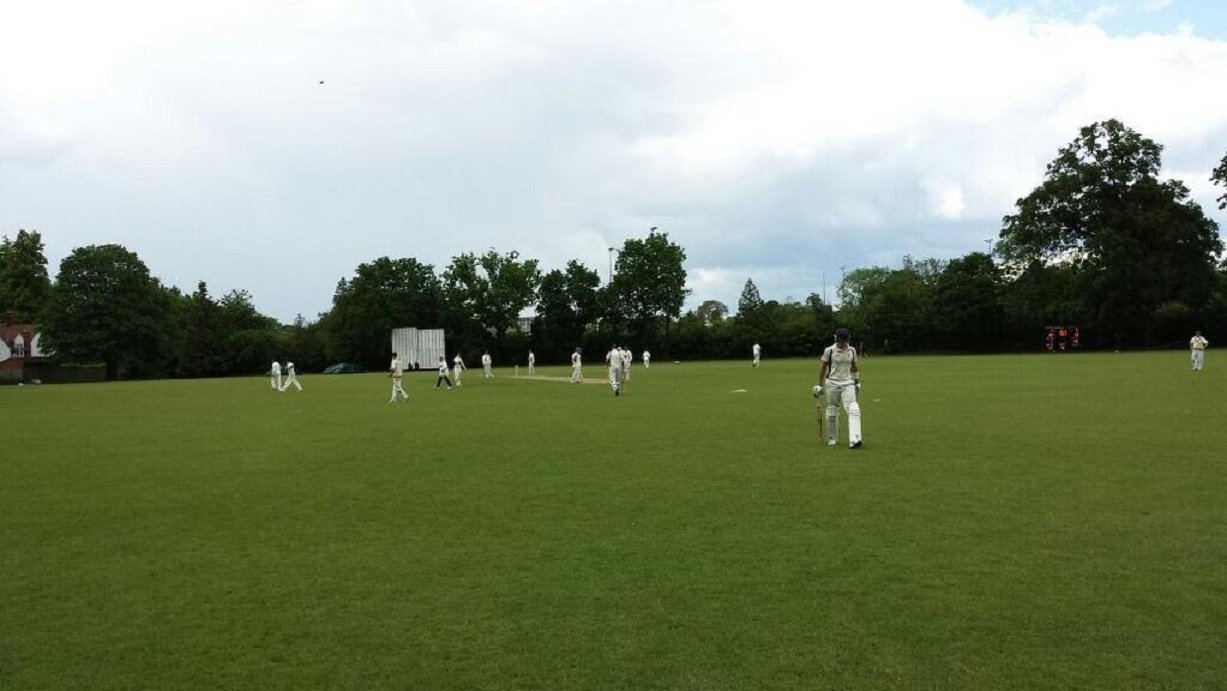 Knebworth Park travelled to Balls Park yesterday hoping to upset league leaders Hertford, who were aiming for their fourth victory in a row.

Damp conditions in the morning had left the game in some doubt but after some hard work by the Hertford ground staff the umpires decided that the game could get under way with only a 15-minute delay. With the covered wicket still hard and dry, Knebworth won the toss and decided to bat first, hoping that the Hertford bowlers would struggle as the ball travelled across a still damp outfield.

Park started their innings with a measured approach, looking to build on the strong batting performance from the previous week. Hertford opened up with left arm spinner Bailey, who offered few scoring opportunities and tested the Park openers with a mixture of turning deliveries and balls drifting into the pads.

After putting away a couple of loose deliveries at the other end, it was one of Bailey’s arm balls that trapped Simpson in front and Park lost their first wicket with the score on 18. The second wicket fell not long after, with Parth Patel tamely lobbing the ball to short fine leg, giving Bailey his second wicket.

Richard Leather and Josh Roseberry began the rebuilding process for Knebworth as the home side’s spinners continued to keep things tight. Both men accumulated their runs steadily, looking to take advantage of the bad ball, while taking little risk against the balls which were not in their scoring areas. Leather, in particular, was quick on to anything short or wide playing some strong pull and cut strokes to take him to 50 in the 26th over.

The Park looked well set for the second half of their innings, with the score 85-2 at drinks and both batsmen set to push on to big scores. However, the partnership was broken in the 28th over as Roseberry fell for 31, looking to go aerial but only succeeding in lobbing the ball to mid-on.

Richard Leather continued to push on and despite not taking full advantage of the batting Powerplay, had moved his score on to 75 when Adam Sergeant lost his wicket with the score on 137. Despite his timing deserting him as he became guilty of trying to over-hit the ball, Leather progressed to 90.

At this point he was granted a big slice of luck, as the Hertford fielder spilled a simple chance at mid-wicket. Determined to take advantage of this, Leather produced two audacious ramp shots to move from 92 to 100 in consecutive balls, bringing up his first league hundred for Knebworth.

He lasted only two balls longer and the innings only one more after that, as the rain came down and the umpires decided to take the players off. Knebworth had scored 187-7 from 46 overs, largely thanks to the efforts of Richard Leather, who scored 102.

The rain continued to fall throughout the tea break leaving the outfield damp. Whilst the umpires and scorers were busy with the Duckworth –Lewis calculations, Knebworth’s players were conscious of repeating the mistake they made at Flitwick of returning to the field whilst the outfield was still damp.

Captain Charlie Randall managed to push the restart back 15 minutes which allowed the surface time to dry and left Hertford requiring a revised target of 188 from 35 overs.
Park decided to open the bowling with Parth Patel and James Leather, both of whom kept it tight in the opening overs. Neither bowler was able to conjure up any wickets as the Hertford opening pair took minimal risk and gave Knebworth a lesson in drop and run cricket.

Experienced Hertford captain Steve Gale accumulated singles and only punished a couple of loose Patel deliveries late in his spell to leave the score on 44-0 after the opening 14 overs.
This was roughly in line with the D/L par score but The Park knew that wickets were required to stay in the game as the dark clouds continued to roll through.

Richard Leather continued his fine game by taking the wicket of Gale for 50 with a clever change of pace.

However, this proved to be the last moment of success in the game for Knebworth, as Bailey came to the crease and quickly made his way to 21 from 15 balls. This took Hertford well ahead of the D/L par score, and when the rain began to come down there was an air of inevitability that the game would be over.

Knebworth will remember the game for a superb hundred from Richard Leather and will hope that it will be the first of many. However, the side will ultimately be disappointed to have lost a rain-affected game and will need to pick themselves up for the visit of Totteridge next week.